Modesto Family Promise > WHO WE ARE > HISTORY

Karen Olson was rushing to a business meeting when she passed a homeless woman on the street. On impulse, Karen bought her a sandwich. The woman, Millie, accepted the sandwich but asked for something more – a chance to be heard.  Karen stayed with Millie and listened.  What she heard made her understand that homelessness brought profound feelings of diminished self-worth and disconnection from society.  Soon after, Karen and her two sons began delivering lunches to homeless people on the streets of New York.
When Karen learned that homelessness was affecting families right in her own community in New Jersey, she knew she had to do something. But this was much more than giving sandwiches. She brought together people in need and people who wanted to help. Existing community resources could provide shelter, meals, and housing. Volunteers could use their skills, knowledge, and compassion to help their homeless neighbors find employment, reconnect with society, and restore their dignity. She approached the religious community. Congregations offered hospitality space within their buildings. The YMCA provided showers and a family day center. A car dealer discounted a van. The first interfaith hospitality network opened on October 27, 1986.
As word spread, more New Jersey congregations formed a second network. Other congregations were inspired to develop similar programs. 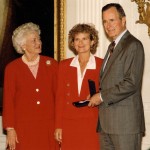